Underground and underwhelmed at MONA

I am in Hobart for a conference. To be honest, apart from a couple of spots, I find Hobart rather plain. My experience at MONA was not dissimilar, though for ‘plain’ substitute ‘tries too hard’. I presume it is trying to be shocking or controversial, when in fact it is largely just tasteless (MONA, not Hobart).

This was my first visit (no need for a second I can assure you), and we arrived by bus rather then the expensive ferry. It is a lovely setting on the Derwent River and it is set amidst a winery, so the journey was not entirely without redemption. MONA, though, is definitely not MOMA.

There were free-range chickens (one with chicks) botting food from the diners at the wine bar, which is where we began our tour, with lunch, and probably should have stayed there. But I preserved into the museum (surely gallery is the correct description), travelling down in a glass lift three levels below ground.

Dungeon-like, with lighting to match, you has to make your way back to the surface, hopefully with your sense of good taste intact. No sick bags were supplied and no warnings provided other than from those who had been there previously. And yet I persisted.

You received a hand-held device which knew where you were located and gave a brief description of the items in your vicinity. If you wanted a more fulsome explanation, you had to press a button marked ‘Wanker Art’. Classy, not. I present here many items largely without remembering who they were by nor what they were called, the reason which is self-explanatory – they were rubbish. Like the item below.

Or this pile of rubbish – literally.

There were some anomalies – like Sidney Nolan’s ‘Snake’, a mural comprised of 1,620 individual paintings which look like a snake when viewed from a distance, incongruously set next to the rubbish. 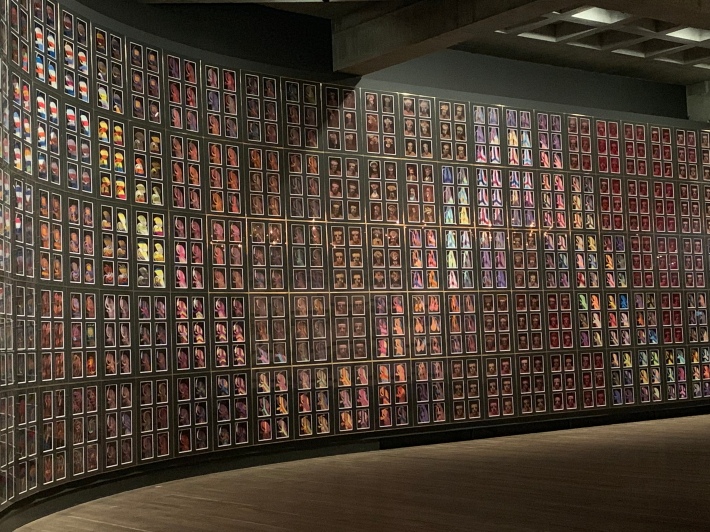 And this unedifying item – poor goldfish. 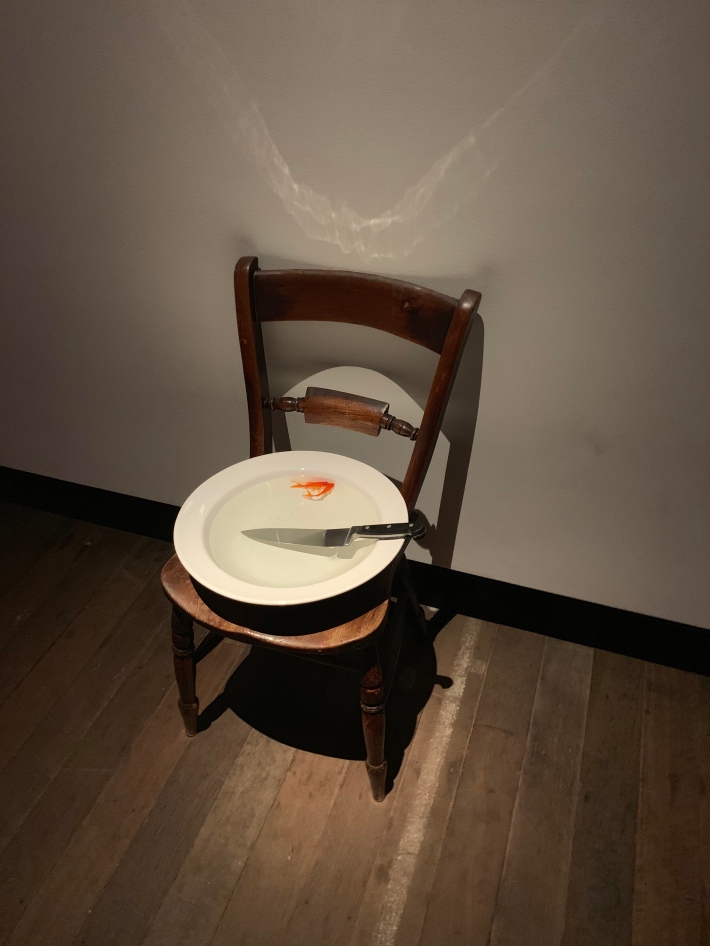 On the must avoid list, was an ‘installation’ entitled:

It comprised artificial bowels which were ‘fed’ in the morning, and which literally ‘poo’ in the afternoon. Oh, the stench …. 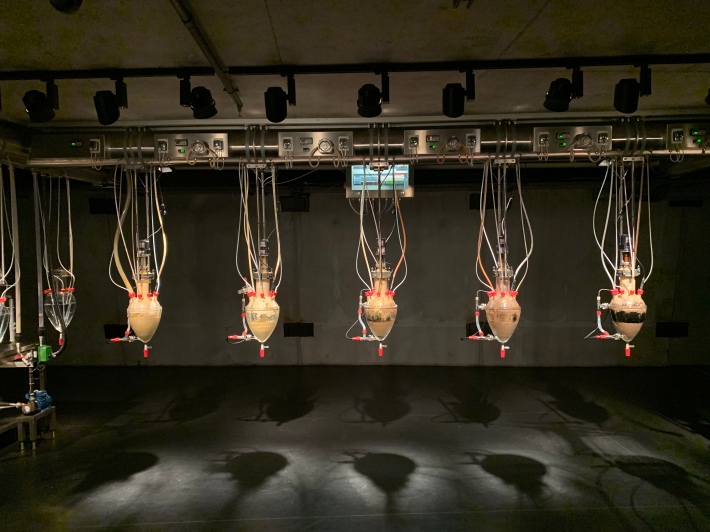 Beyond grotesque (my apologies dear readers). Timing is clearly everything here, so I moved on quickly.

The above water feature spelt out politically-correct words in raindrops. Quite difficult to get a photo before the words self-destructed, but it was visible from all levels of the dungeon, so I gave it my best shot. 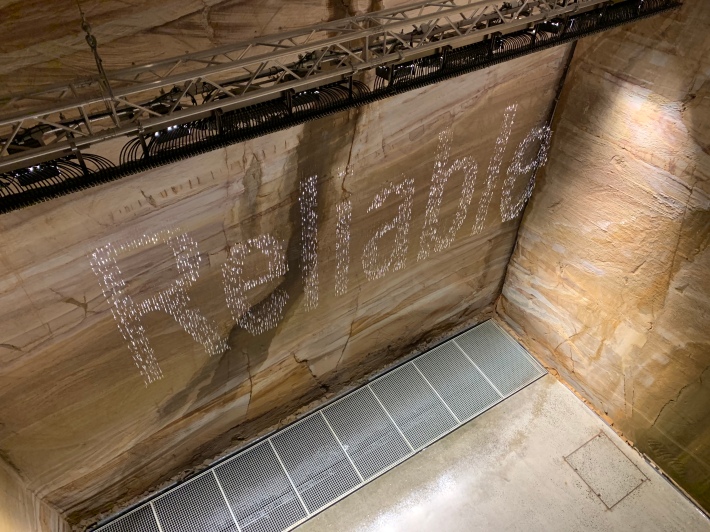 Amongst the odd and modern were some ancient Egyptian items as if left behind by earlier inhabitants or subterranean life-forms. 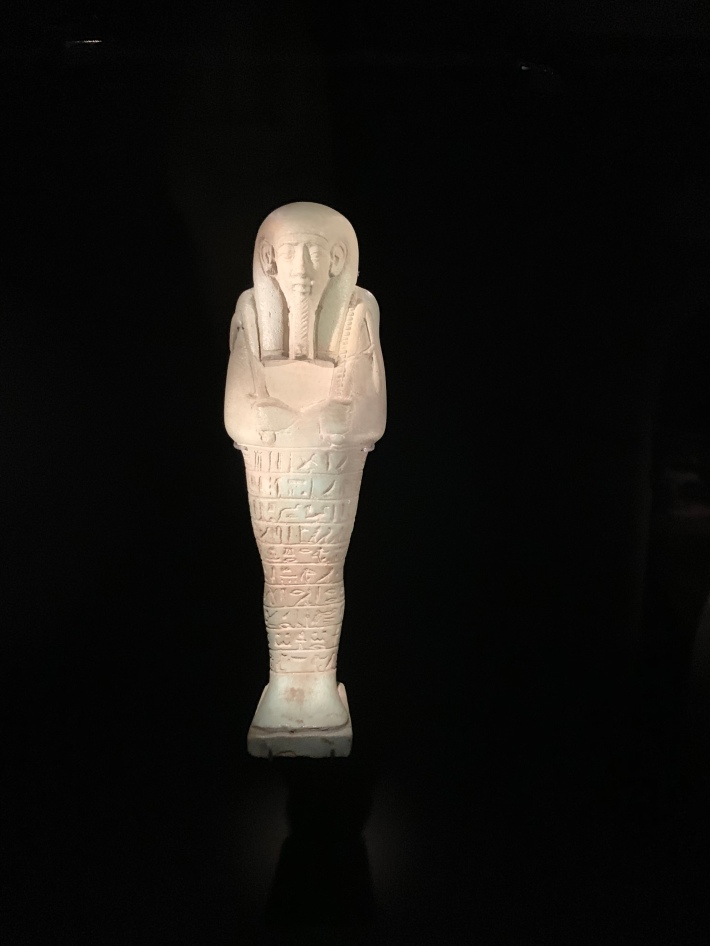 And some who age and purpose defied identification.

There were a few less detestable items: 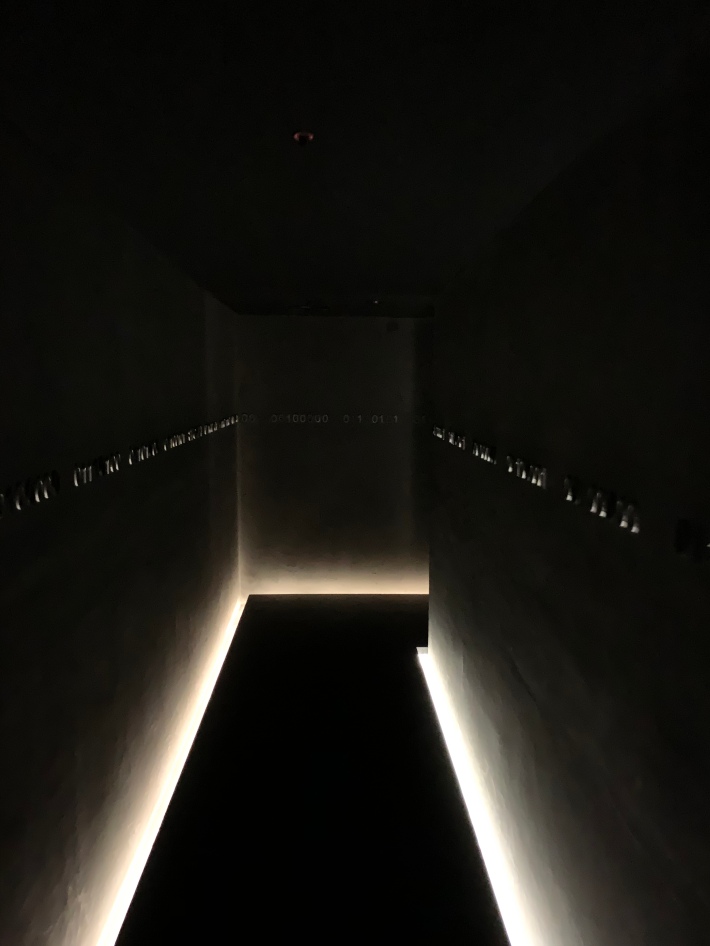 And this collection of precisely placed boxes.

Or this item which appeared to be made from dough – gross. 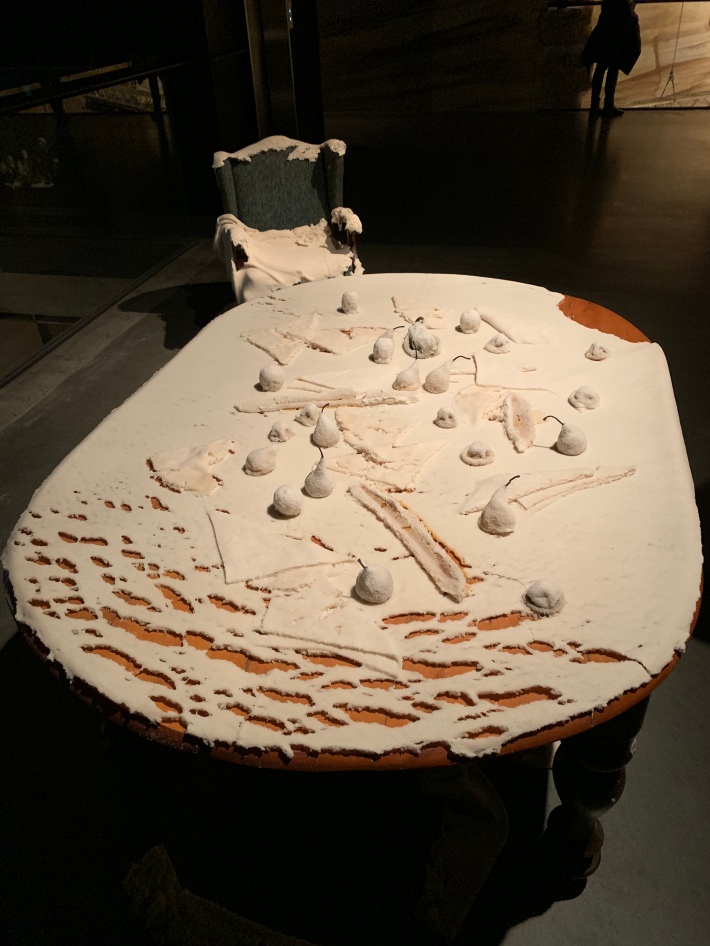 There was a performance-art piece:

and some unusual portraits, perhaps earlier work by the artist-in-residence above. 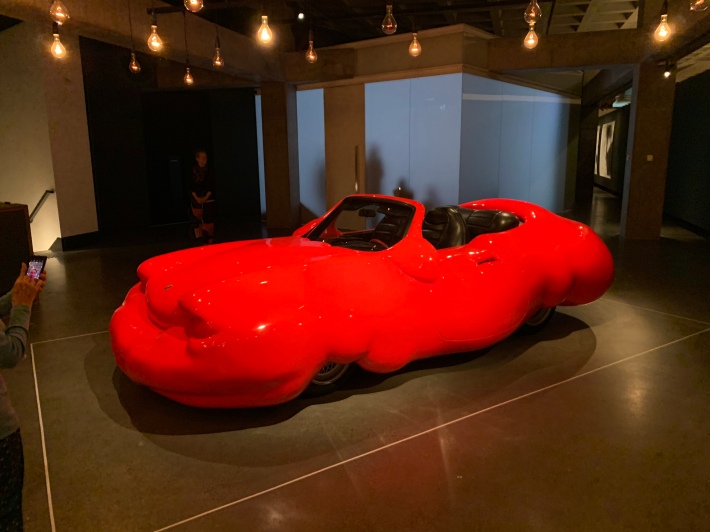 Rolling in dirt and fruit (as you do)

and how not to eat watermelon

There was one tiny corner containing what many could relate to as modern Australian art, Boyd and Whiteley, even if perhaps not the ones you might want in your own living room: 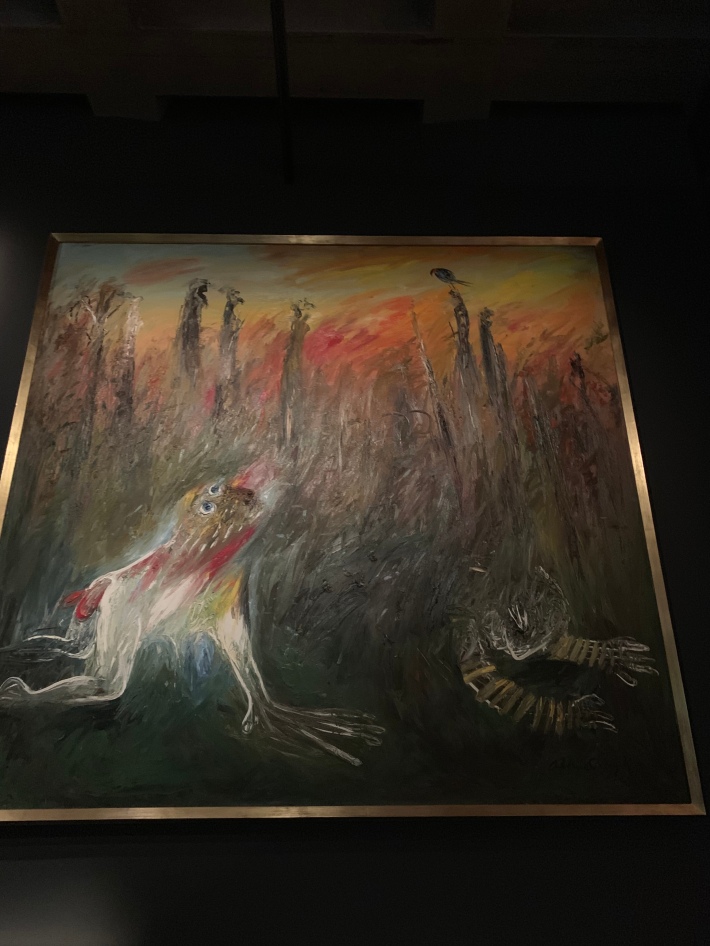 The strangeness continued even into the obligatory gallery shop, but I bet you expected that: 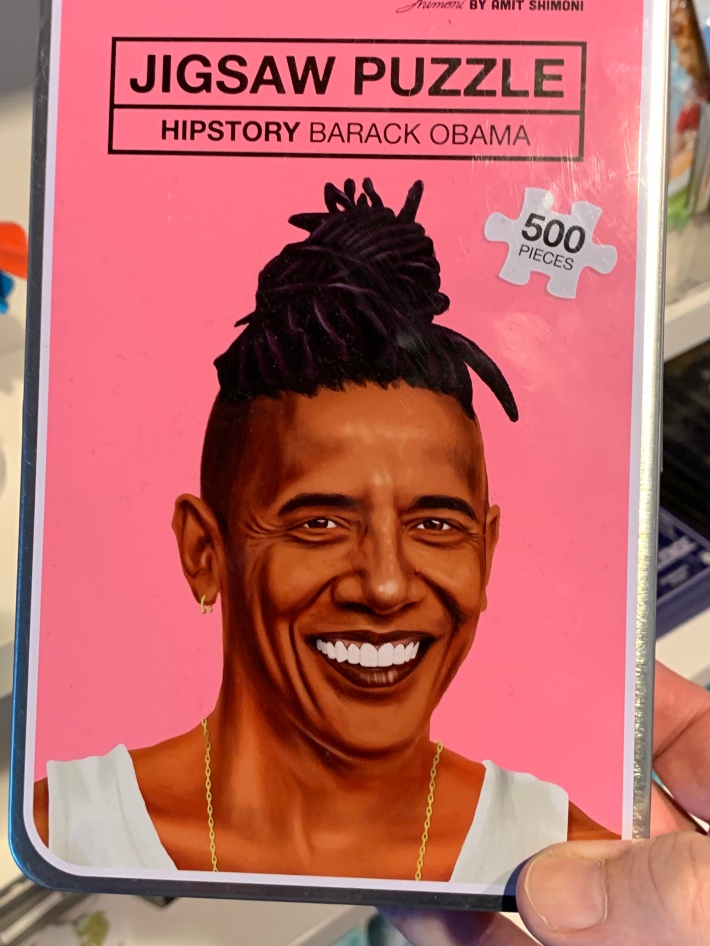 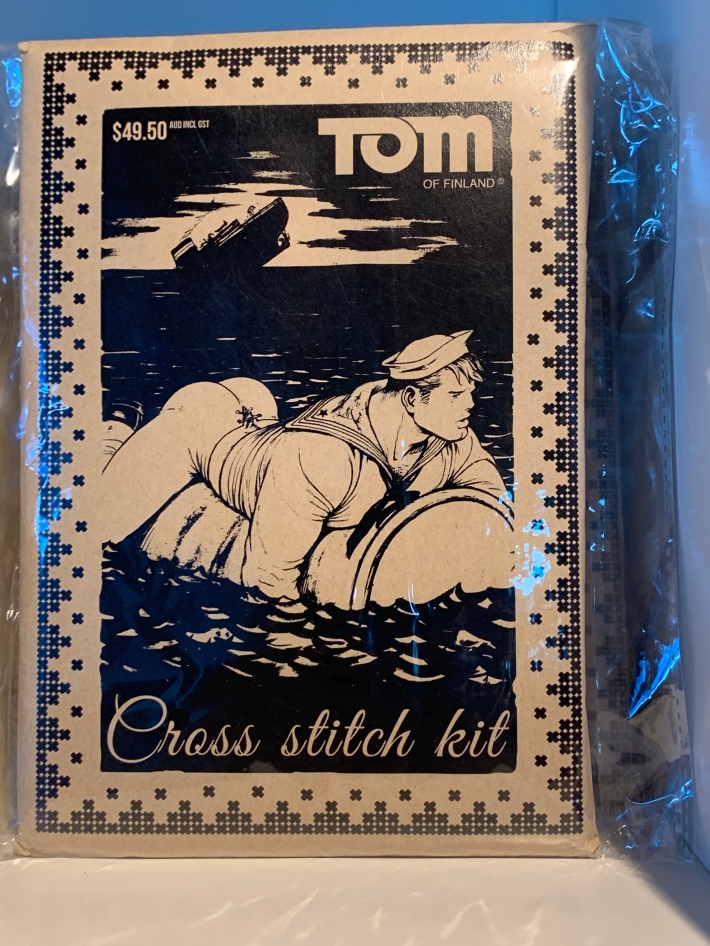 Outside, as if oblivious to the exhibition, the chickens continued on their merry way. 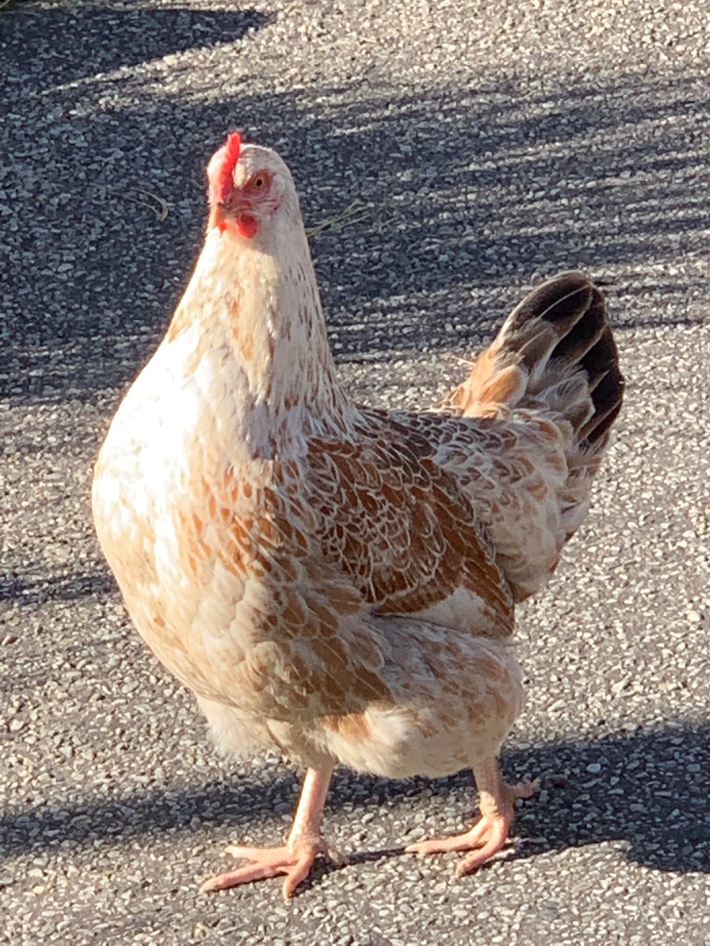