I don’t know why the cover photo looks as it does because the characters in the play did not look like that at all.

It’s been nearly 40 years since I bought the script of a play. It was ‘The Real Thing’. I was so captivated by the acerbic repartee between Glenn Close and Jeremy Irons during the first act, that I barely noticed that Andy Warhol was next to me. (Well, he was rather tiny and very unattractive, so why would I stare?) I pushed past him to get out at interval and bought the script in the foyer. I did momentarily entertain the possibility that we would all get into his stretch limo and move on to Studio 54 or a penthouse balcony overlooking Central Park, but he was whisked to his limo and chauffeured off before I could introduce myself. Anyway, I digress…..

This evening, I could be forgiven for thinking I was in New York, except for the drab Sumner Theatre. I had a great house seat with no one next to be in all directions. I could have been a critic from the New Yorker. [The theatre did fill up].

The performance was Switzerland, by the Melbourne Theatre Company (transferred from the STC) starring Sarah Peirse and Eamon Farren. It was excellent and I have ordered a copy of Joanna Murray-Smith’s book on-line, not available in that foyer. There are some great one-liners just like The Real Thing -“You can forage in the kitchen like a guest rodent”. 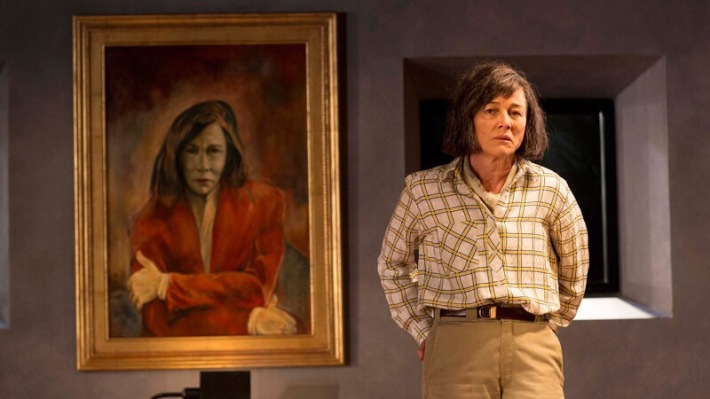 Peirse did a sterling job as Patricia High-Smith and young Eamon Farren was equally outstanding as an underling from her publisher. Full marks all round.

They handled an interruption to the performance for a medical emergency, goodness knows how the staff knew there was a problem. Simultaneously, people behind complained that they could smell gas (I assured them it wasn’t me) and were told ‘it’ was being fixed tomorrow. The cast returned and resumed from an earlier point, so we heard a bit extra. 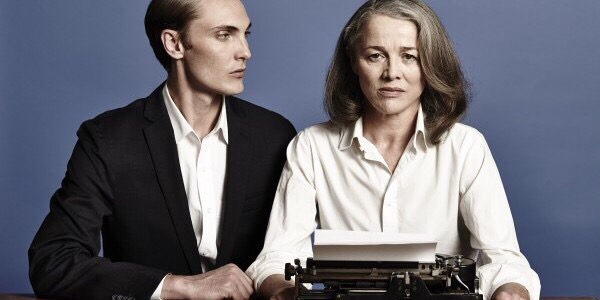 The only blemish was the wardrobe. They never wore the clothes in the photo above. Rather it looked like they had been dressed by someone who has never met a gay NYC executive. They are well-dressed. Farrell, who was supposed to be a lackey from Knoft Publishing, who would never have arrived at a top client’s home wearing a duffle coat, jeans and unpolished shoes, no matter how far round the world they had travelled. Never ever. The outfit was completely incongruous with his dialogue.

It is, however, the must-see play of the season, especially for lovers of Highsmith’s Tom Ripley series.