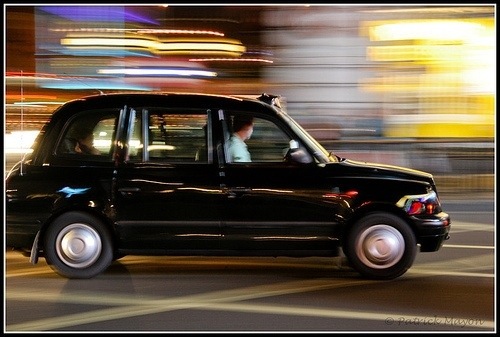 One thing I had discerned after the suitcase episode this morning. There was no way I would be able to manipulate my luggage into a cab and then down stairs and escalators at Paddington Station to catch the express train to Heathrow, despite already having a first class ticket. No way this side of a hernia operation at The Lister Hospital near the Chelsea pensioners home. I could get into a cab, but that was where I was going to stay until I reached the airport.

I asked the hotel to phone a cab for me, which they did. Not a black London cab – well actually it was black but not the usual kind, a private cab perhaps but a very roomy car and very new. The driver was of recent Indian heritage and as we set off from the curb I was unreassuredly informed that this was the worst possible time to be driving to Heathrow, from Bloomsbury or from anywhere really – 6pm peak hour.

No matter, I was relishing the thought of the free food at the BA Lounge which would be available to me on account of my upgrade to business class. I smoothed out the wrinkles in my clergy shirt after changing into it in the back of the cab.

After about half an hour in gridlocked traffic I noticed we had only travelled as far as Paddington Station. I waived it goodbye as we ever so slowly rolled past it.

The driver kept apologizing about all the traffic. “One or two miles more and it would be okay”, he assured me. It never was.

After an hour and a half we finally crept into Heathrow as if approaching the holiest of holies. The driver pulled up at the curb right next to a luggage trolley. We both laughed at this sign of providence. It was to be my last.

I knew all was lost when I reached the check in counter. The check-in attendant was French: ‘Liberté, egalité, no clergy’.

I was first asked if I had checked in on-line. Surely this was for people with no luggage, had I wrongly assumed. That couldn’t possibly apply to me! I was told to go round the corner to a machine and get my boarding pass by scanning my passport. I had to take my luggage with me. I had never thought of ‘on-line’ as being ‘just around the corner’. Couldn’t she just do it in front of me seeing as how I was already made my way through the queue to the counter?

And I didn’t want to get a boarding pass from a machine – I wanted one from a clergy-loving check-in lady who would take pity on a poor priest with a wrinkled shirt and more bags than Zsa Zsa Gabor. I wanted an upgrade to a class that gave me a bigger luggage allowance, priority access to immigration, boarding and champagne. I didn’t see how a machine could do that without human pity and intervention. I doubted this would be achieved by my scanning anything, nor it appeared would it come from the Marie-Antoinette behind the counter. I was never going to eat cake at this rate.
I asked her if she worked for Qantas. She looked mortified that I had the audacity to use a word that contained no acute, grave, circumflex or ‘u’.

The prospect of sitting ten-abreast on the lower level of the plane and without a champagne infusion held little appeal but I could see the writing on the wall (even from around the corner). I returned with boarding pass in hand, still pushing a trolley full of bags.

Now we had to deal with the issue of the heavy bag. ‘Too heavy’ said Charles De Gaulle’s mistress. I would have to pay extra. I thought of drawing her attention to the fact that if I could fly on the upper deck instead, my suitcase would have been within the weight limit set by the ‘Companiê Accredité de Bags’ but she wasn’t having any of it.

AND I had to suffer the indignité of taking my bag and all my hand luggage ‘around the corner’ again to pay at another counter as she did’t touch filthy lucre. Then I walk the ‘walk of shame’ back to her pushing my trolley so that my bags could be processed, standing at the top of the queue and waiving my fellow travelers on to other check-in chicks (chics?) as I had to wait for her to be free.