I have not been so well during my visit (man ‘flu) so I haven’t been posting regularly whilst repairing my health. Feeling better I ventured yesterday to the Frances Tavern in the financial district (Broad and Pearl Sts). The building housed George Washington headquarters during the American Revolution and it was from here that he farewelled his troops after the English left.

It was been significantly renovated but retains a modern rusticness with a warren of rooms. Lunched with friends. 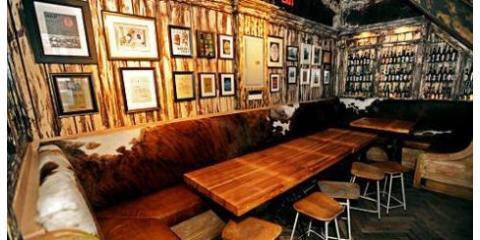 They certainly have retained the rustic lighting inside. We sat at the left hand end of this table, but unlike this photo it was so dark that I could not read the menu at all. I though it said ‘Roast Beef Fingelings’ and expected a roast beef open sandwich cut into fingers. Instead the delivered plate comprised a bed of potato crisps adorned with roast beef, covered with cheese and grilled. It was yummy, but turned to cement in my stomach an hour later.

About that time I was walking past Century 21, a short that sells interesting high-end clothing very cheaply. But you get what that have and not what you want. I decided to get an Uber home. I can’t do taxis because the vacant ones are not air conditioned. With the temperature about 30C and with 88% humidity, Uber is the only way. 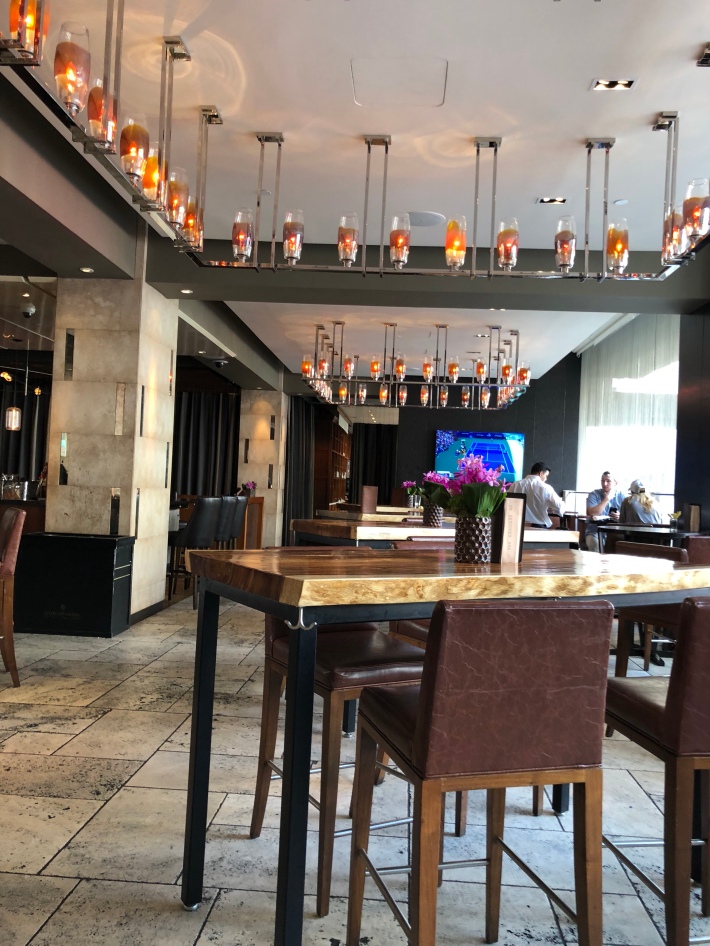 This morning I had breakfast in the hotel, again. Despite choosing a room rate that didn’t include a $US35 breakfast, they make you may for it be charging an additional daily ‘Destination Fee’ of $30+tax which includes a daily (non-cumulative) food and beverage allowance of $25plus a daily (non-cumulative) laundry allowance of $15. There were very particular about the non-rollover of unused daily credits when I checked in, so I have been very particular about claiming my daily allowances.

But you do have to work at it. They do not replace the laundry bag and form every day. I’m not sure if this is beyond the maid’s duties or part of a scheme to impede claiming the allowance. Perhaps I’m the only guest out of 900 rooms who is too lousy get breakfast included (why would I normally want to eat breakfast at the same place each day?).

Speaking of the maid, mine’s name is ‘Hello Housekeeping’, why do they make up the beds at 1pm only to return at 5pm to turn it down. Wouldn’t you just leave them turned down and ditch the cushions? Any where have the guests before me been placing those dirty cushions that sit on the clean pillowcases. Eeeww. Anyway I’ll leave her a tip when I vacate, as she has had to put up with me for nearly a week.

Today I thought it would be best to take it easy and just walk down to Macy’s to get the security tag removed from that shirt I bought on Monday and then Uber to the Upper East side for some quality shopping. Easy, no. Marathon walk.

I fixed the shirt thing, no problem. But getting uptown was a nightmare. I had to wait 15 minutes from the Uber to come from the next street. Here I am, waiting, outside Macy’s with a landmark in the background.

Of course I’m looking the wrong way for the car, but you never can tell if you are standing at the right pick up point. The Uber global positioning map keeps moving me around even when I am standing still. Makes me giddy and nervous that I will miss my ride (but hasn’t happened yet).

Of course there was a parade along Fifth Ave. all cross streets were blocked off and Manhattan went into gridlock. At least I had air conditioning. We crawled uptown as far as Central Park but then the poor driver began to panic as the park roads were closed too.

So I offered to get out, not far from Malcolm and Lucy Turnbull’s apartments in ‘San Remo’. I know they are in town because I’ve seen the photos. Perhaps they get lots of Aussie callers now that everyone knows where they live. I just left my card with the concierge.

Then began a huge trek across Central Park which I hadn’t anticipated and wasn’t sure I felt well enough to accomplish but had no option. This sign was a bit disconcerting. Like where would I find soap and water to wash my hands. Back to Mal’s? “Hi, I’m from Melbourne and I have Distemper “.

And then, moments later, I encountered this.

I wasn’t prepared to recheck species, I just ran off.

There are some pretty spots in the park, though there are lots of people, music and noise.

And some underpasses from episodes of Law and Order. 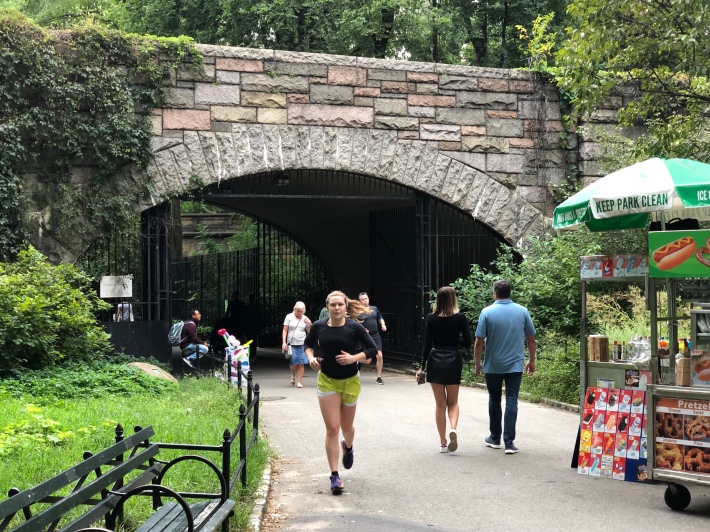 Once I made it to Fifth Avenue, I had to find a break in the parade route to get across the street. So eunion parade. The participants were clearly over it. A nice policeman assisted me. 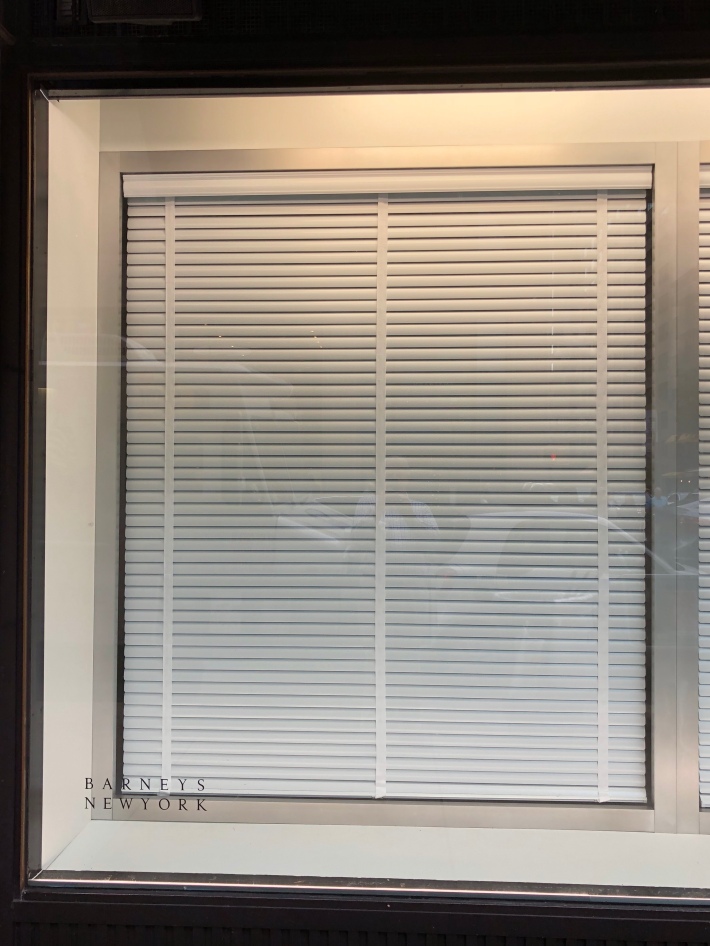 I went to pay homage at Barneys but it is a mere shadow of its former self when previously located in Chelsea. Walked in, walked out. Looked like they were selling Venetian blinds. But this met me in on the way in. Rubbish.

I did get to see my favourite building – the Seagram building, so that was a plus even if it no longer houses The Four Seasons Restaurant. 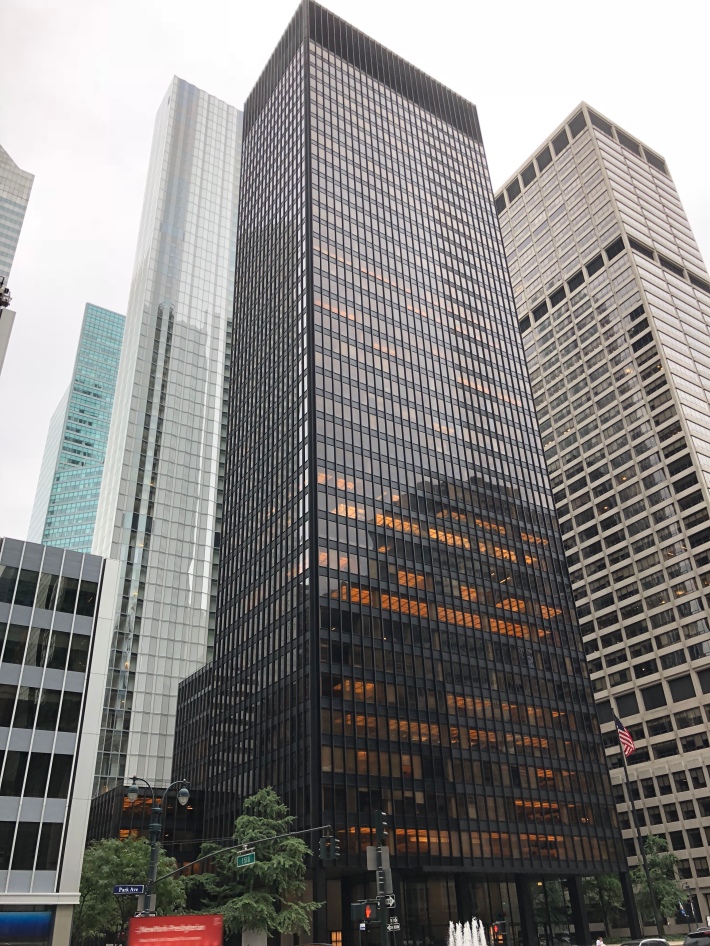 That’s why I also like 140 William St in Melbourne.