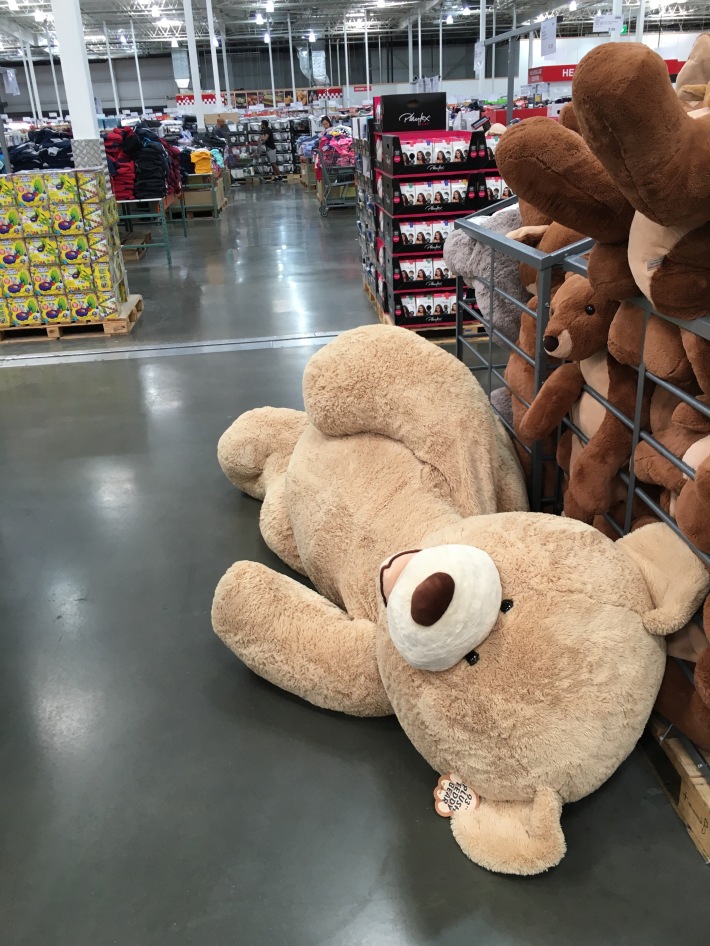 Am exciting day –  an excursion to COSTCO.  I haven’t been there for ages, well never actually. I joined on-line on behalf of the parish and so I had to go in person to be photographed for a membership card. While I was there I thought I would reconoitre to find out what they sold and to get some idea of the bulk of the purchases required.  The lady at the counter asked me if I always wore dark glasses inside and I said it was because of their hideous lighting (well it was but also I just didn’t want to be recognised shopping in a discount barn). I said I always wore the glasses and the fright wig if I was forced to shop at Target or Kmart. ‘What about Aldi?” she enquired. I said that I didn’t know what Aldo was wearing but that I did remembered him from ‘Number 96’ on TV. Apparently it was a different Aldo she was asking about.

I enquired of her how others could use the card unless they borrowed my wig and glasses? She said that, despite it being a business membership, all the business people had to live at the same address. I thought that this was strange and suggested that they would probably get up to monkey business if they all live together. But as I lived on my own, how could the other business people use my business card? She shrugged and look at me piteously as if to say ‘All alone in the world – at your age’.  She handed me the card and it occurred to me from the photo that I looked like Ronald McDonald in vague disguise. Glad I didn’t wear that mustard jacket.

What an enourmously large place and so oddly arranged. 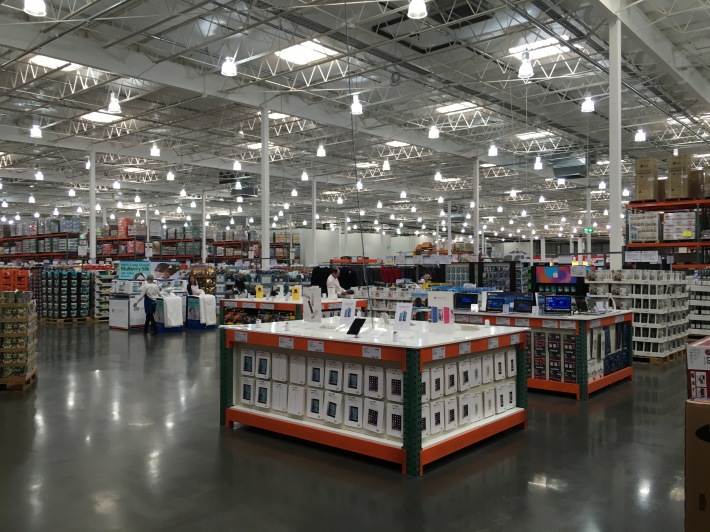 It was tidy but difficult to navigate without GPS co-ordinates. I was initially approached by a man grilling boccincini next to a rack of faux-leather jackets. I felt sorry for him all buried in leather and fur, so I tried his goods but deferred any purchase.  I came upon a KJV Bible with etchings of biblical events, on a table between refrigerators and chocolates. Many of the items had no prices so you just have to take pot luck when you get to the checkout. The bible cost $20. Bargain. The purchases began. There were some great coffee table books, located between the motor oil and batteries. There was an open bottle shop area which I trolled for a while as I was reminded that I needed some supplies for Archdeacon’s drinks at the clergy conference in May. Apparently Archdeacons have to bring their own drinks and for everyone in their Archdeaconry. Good to know in advance otherwise that evening could have been awkward. Some of the  plonk looked interesting, but this bottle was already taken –  someone had written their name on it. Shame, it appeared to be the last one.

I’m not sure what it is about motor oil (COSTCO may have invested in oil futures or perhaps they are owned by BP, who knows), but stacks of it reappeared next to the boxed lobster, which in turn that was next to the crayons. Don’t ask, I thought. Some of the other customers had children in their trollies. I asked a few women what aisle the kids came from, as a few extras would pad out our monthly kids’ church nicely. They must have remembered they had left the iron on at home because they scurried off at a great pace before they could reply. Search as I did, I couldn’t find any. Perhaps they had been on special and sold out quickly. Must remember to go earlier in the day on my next visit.

There was one awkward moment when I thought I recognised the person standing next to me, both staring at the boxes of 100 toilet rolls and each no doubt wondering how we would fit them into our cars. I adjusted my wig and moved on.

Despite needing nothing at all, I managed to spend over $700. As usual it was the half-dozen bottles of Verve that pushed me over the top. Anyway you can never have too much wine for a clergy conference, I say. I may have to take it intravenously or in a thermos just to get through the three days.

Next time I’ll bring the SUV for those toilet rolls.