I feel that I have stepped either into an episode of Morse,

This tower, ‘Tom Tower’, over the college entrance houses ‘Great Tom’ the loudest bell in Oxford. The quadrangle enclosed by the college is ‘Tom Quad’. None of these names seem very imaginative to me, nor did the tower and bell exist when the college was founded by Cardinal Wolsey as Cardinal College. Indeed the gatehouse was left unfinished when Wolsey fell from royal grace in 1529 and the tower was eventually designed and built by Christopher Wren in 1681-82 a design that was a precursor to the Gothic Revival movement of the eighteenth century.

Lest it be thought that transitioning from female to male is some modern invention, the bell was was originally in a twelfth century abbey at Osney where it was known as ‘Mary’ and moved to Christ Church on the dissolution of the monasteries,whereupon it was renamed ‘Great Tom’ – go figure.

We are being accommodated in Blue Boar, a modern building I would say was a cross between brutalist and modernism. The rooms have ensuite bathrooms too small to photograph (or use) but large windows allowing ventilation in this warm season (brought on by global warming, no doubt).

Yesterday I posted a photo of Hall where we eat and which featured in the Harry Potter movies (which I have not seen), so perhaps the staircase leading up to the refectory is also familiar to some movie-goers. 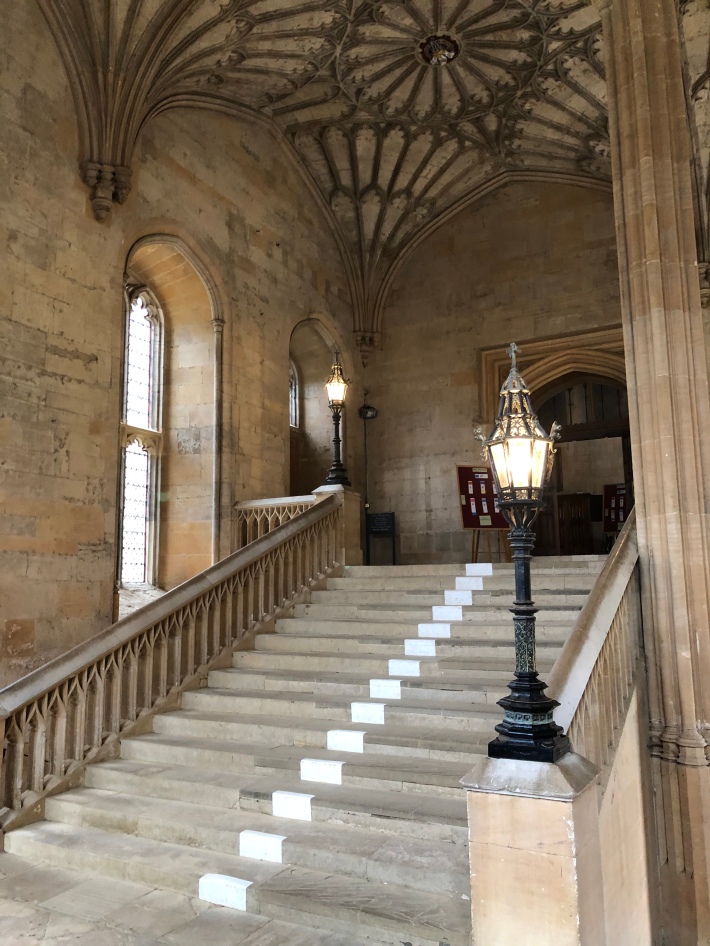