The M/V Queen Victoria, only commissioned in 2009, has just returned to service after a complete refit, so it is all new on the inside.

I have a delightful stateroom, midships on the starboard side of Deck 5 with a great view. 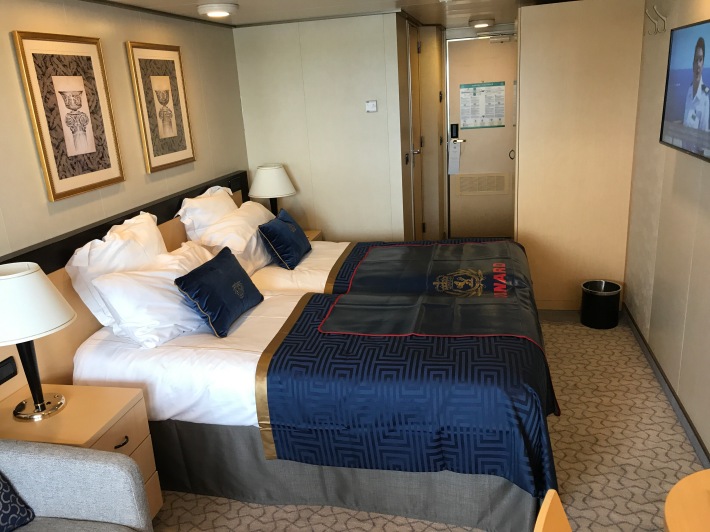 with it’s own small verandah. No pacing the deck here.

However, if you walk around Deck 3 it is one-third of a mile. I tried it once after dinner. That was enough.

There is a great wardrobe, since I’m on my own (you hang all the clothes up and when you leave you have to put half of them back unworn. Typical holiday.

I am just above the life tenders. We had our mandatory safety muster before the ship slipped its mooring at Southampton’s Queen Elizabeth II terminal (piers 38/39). There are a few people on mobility scooters, a few walking sticks and the man in the adjacent caring is in a wheel chair. By comparison, the HTSH parishioners look like the Australian Olympic Team. Good luck in an emergency. Some people don’t seem to listen (or understand) what they are told. I was the only man to bring a jacket and a hat, despite our being told to do so on numerous times. 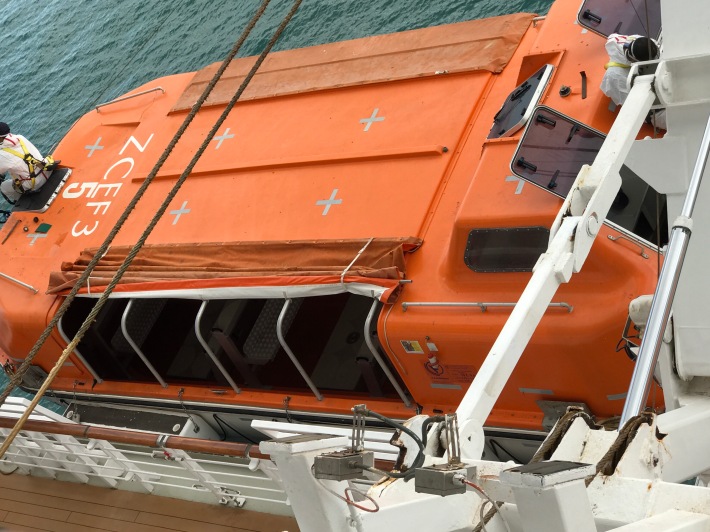 I took this photo whilst they had the lifeboats extended out over the ship’s side for maintenance.

People were asking why we would need a hat? Admittedly the lifeboats have roofs, but those on the ends near the outside may get plenty of Mediterranean sun, or it might be very cold. Anyway, my life jacket fits though I don’t look good in orange.

I now have inserts for my shoes to reduce the realign my gait and reduce the risk of knee and hip replacements. Trust me to fall for that one. I also have an appointment in the gym today to learn about increasing my metabolism. I’m sure it will involve trying to sell me something else.

One of my suitcases, the one I am going to get rid of, was injured by on the way up the conveyor belt onto the ship, but didn’t explode. The extension handle is now stuck up. Not the worst thing, but I will leave it behind when I disembark in Barcelona having decanted my things into my new suitcase.

I chose the early sitting for dinner. No photos of the food in these reports but the waiters gave me an autographed copy of all the menus. The food was great. Men must wear jackets to table. Not generally a stretch for the Aussies on board – 179 of us, the second largest contingent, though wish I had paid more attention to the combination of clothes that I have brought and bought.
I am at table 599 in the Brittania Restaurant, which is two stories tall at the rear (aft) of the ship with a great view of the stern. I do love a good wake.

I
I have dinner each evening with Peter and Greta. They are friends who met on a cruise 18 months ago. They have been cruising together ever since. They were great company and I loved to catch up with them each evening. 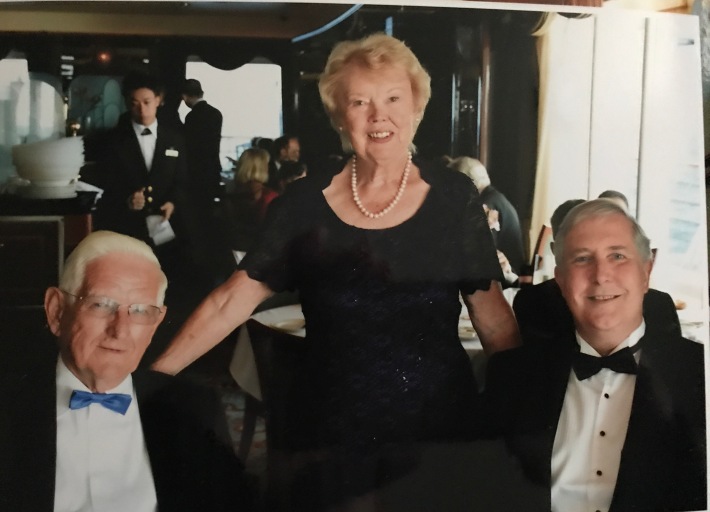 Quite a few people seem to cruise regularly. Must all be Tatts winners. 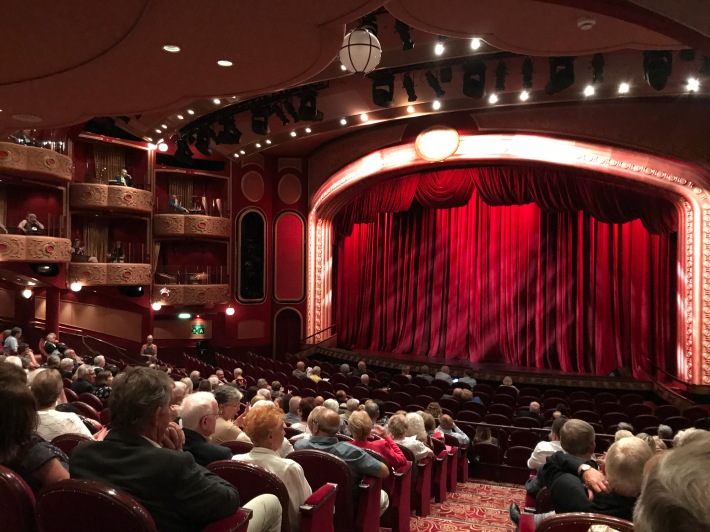 After dinner I went to the first show in the Royal Court Theatre, a tribute to the ‘rat pack’ era in both song and dance. There are eight musicians in the orchestra (big band sound), ten dancers and four singers. There is a show every evening.

After the show I went to the Chart Room for a cocktail (okay, perhaps two)- the aptly named ‘Hope in Heaven’.

Every day on board was very similar, so just read this post a few more times.