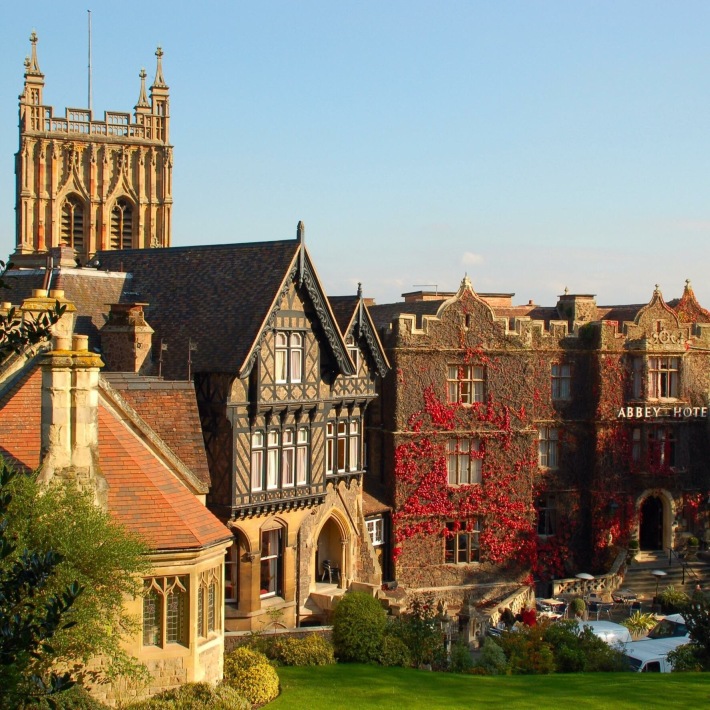 How grand to be able to visit my friend, Dr Brad Wells, in his own home town and to visit his school, Malvern College. A slight delay on the train from London meant that I missed my connection. I had to get a later train from a different station that saw me wandering through Birmingham. Thank goodness for Apple Maps. I lost an hour in there somewhere but we had a great day in any case. 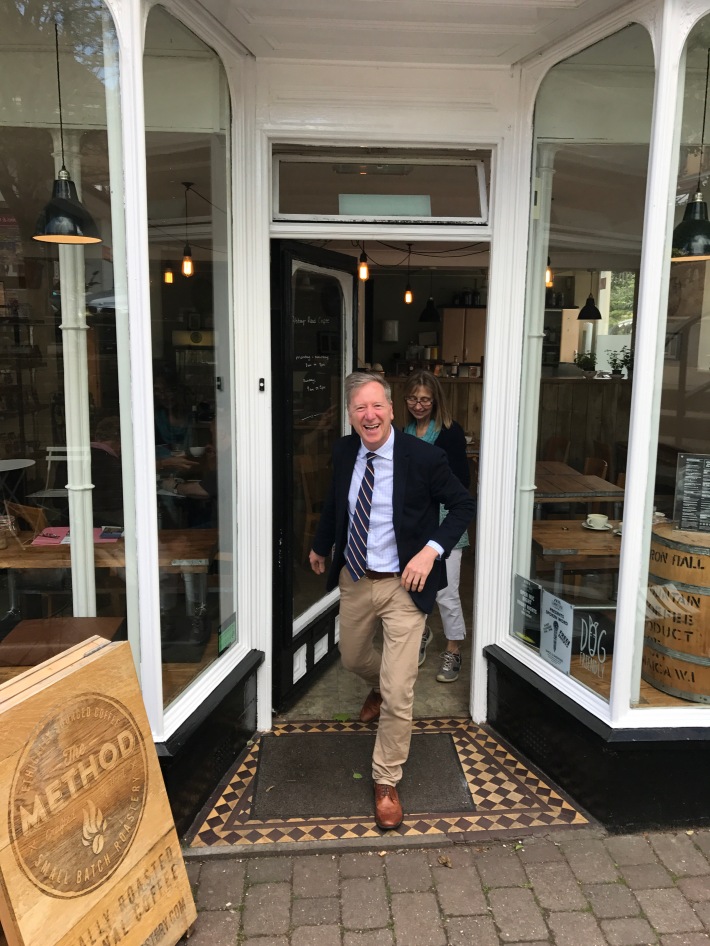 Like sensible ex-Melbournians we began with coffee and then I had an opportunity to wander through this beautiful town, much time spend in the Priory church (see separate post). 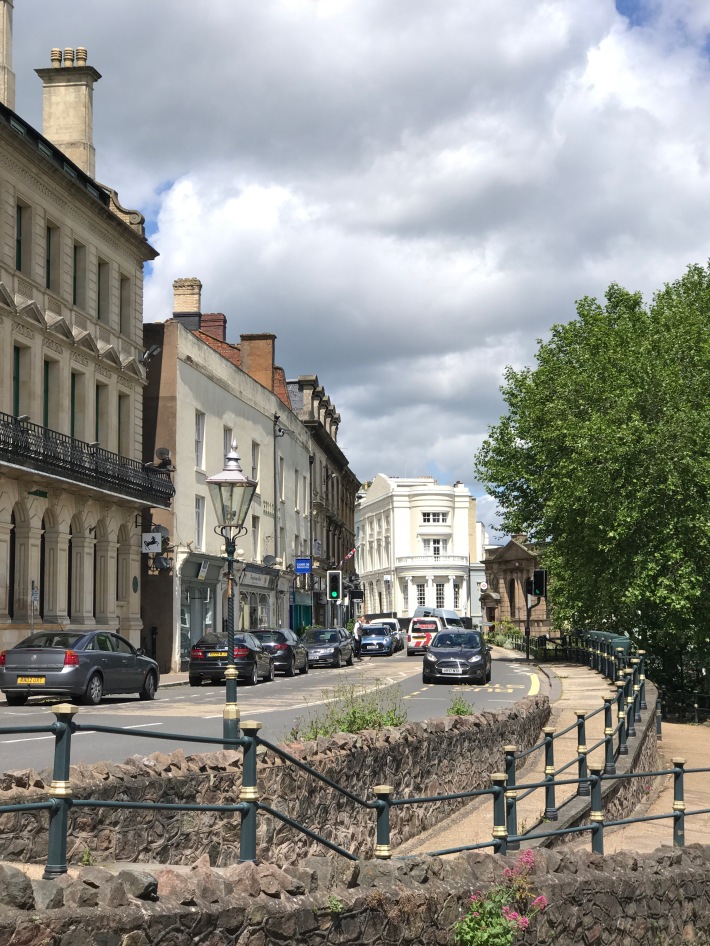 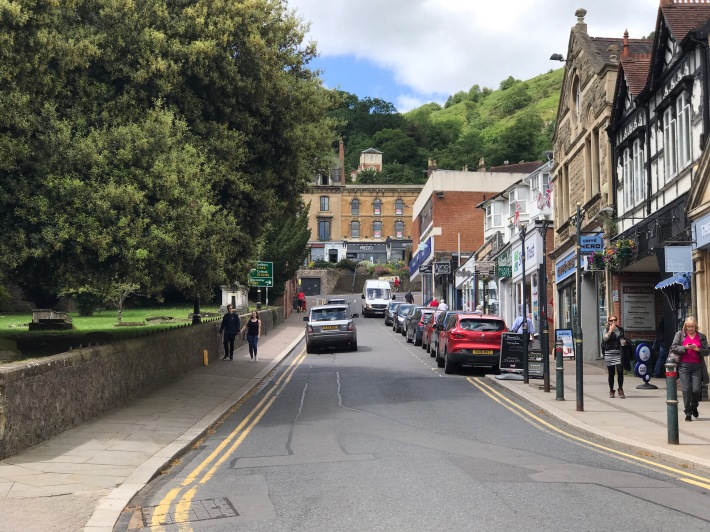 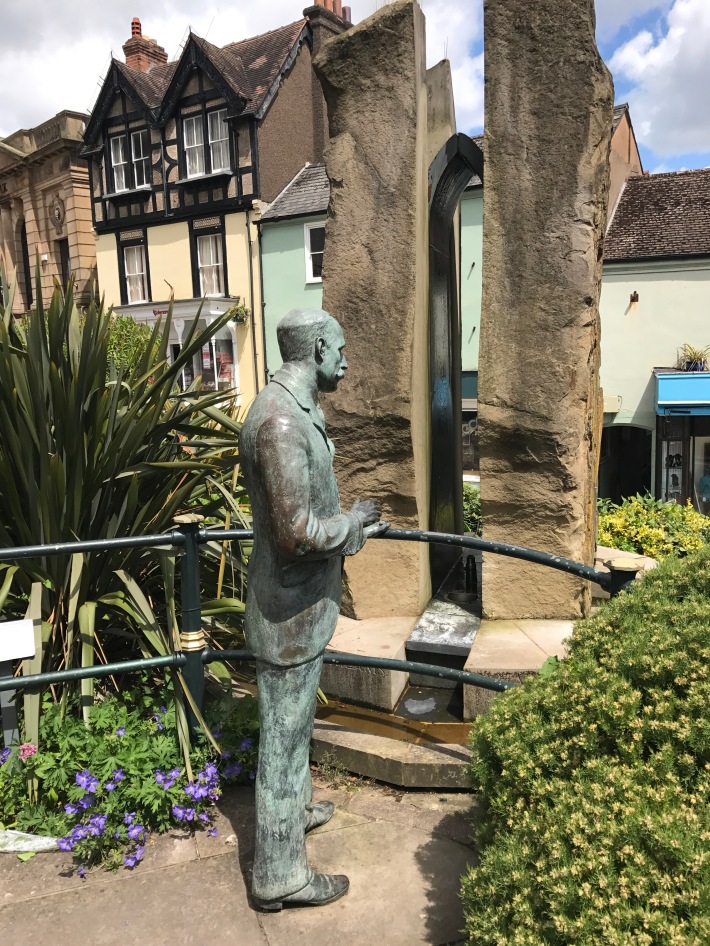 Malvern was home to Edward Elgar, seen here at the Enigma fountain, which celebrates the composer, his ‘Enigma Variations, and Malvern spring water – preferred by HM the Queen. The fountain has no pump and is naturally fed by three pure springs from the hills above the town. 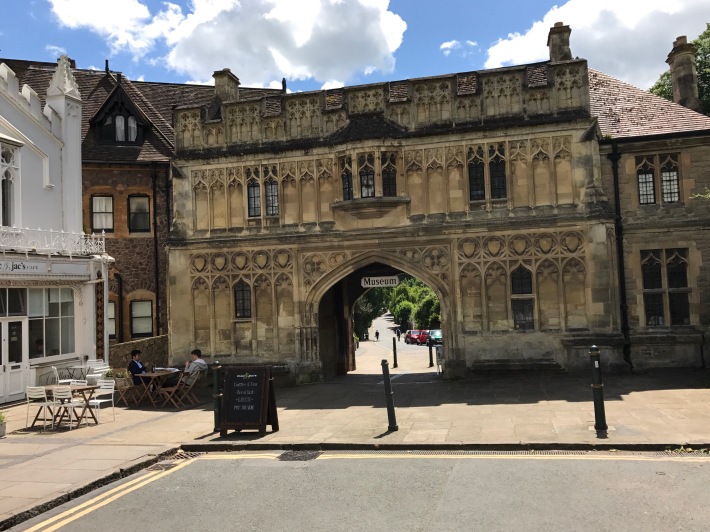 Above, the Priory gate (the Priory itself was destroyed as one of the many scandalous acts during the English reformations), but fortunately the Priory and its grounds were acquired by a local for £20 and the church was retained. 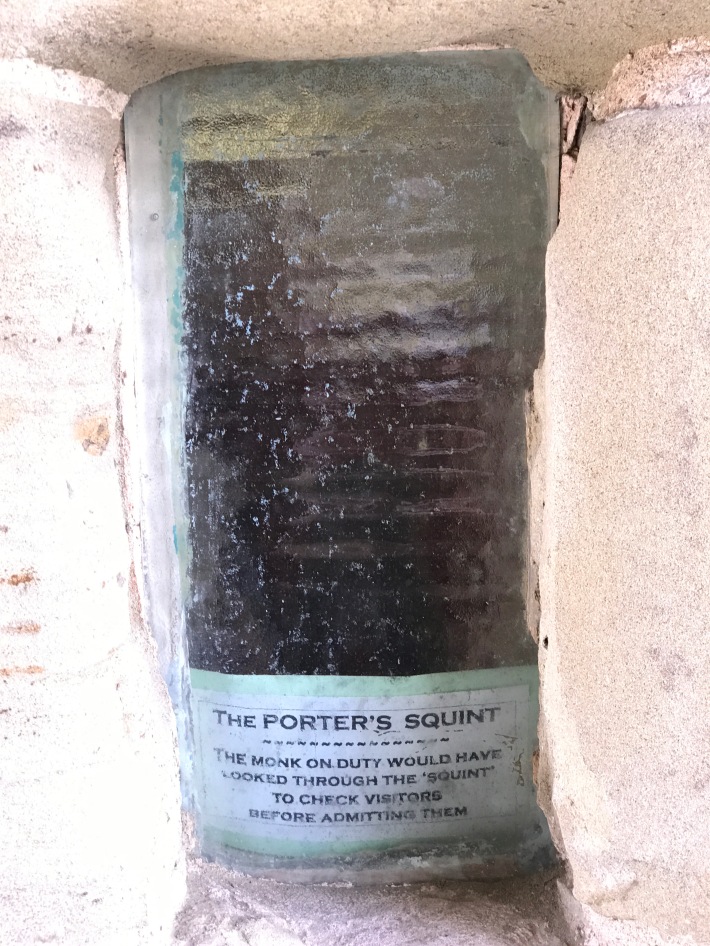 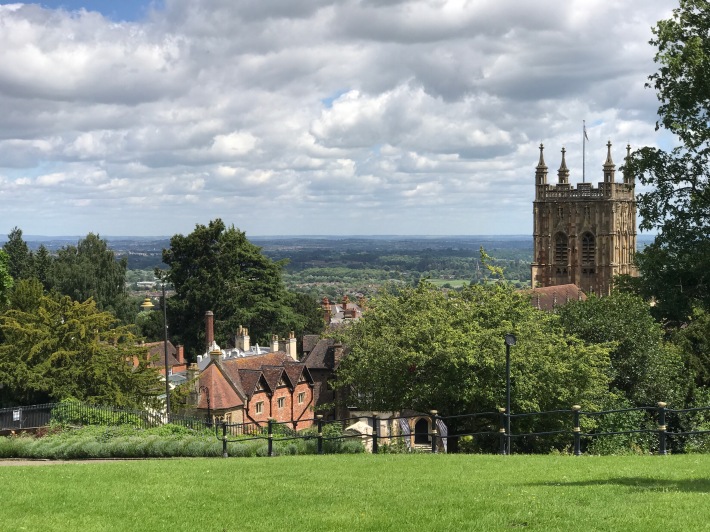 A seriously beautiful Worcestershire town. And a hilly one – glad I have one leg longer than the other. We journied to The Chase Inn at nearby Upper Colwall for lunch. Great views over Herefordshire towards the distant hills in Wales. I did my best to make an indent into their Ploughman’s lunch. 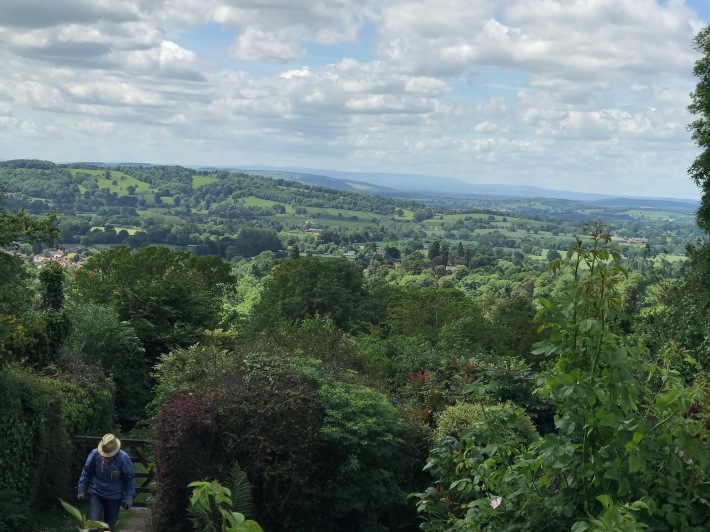 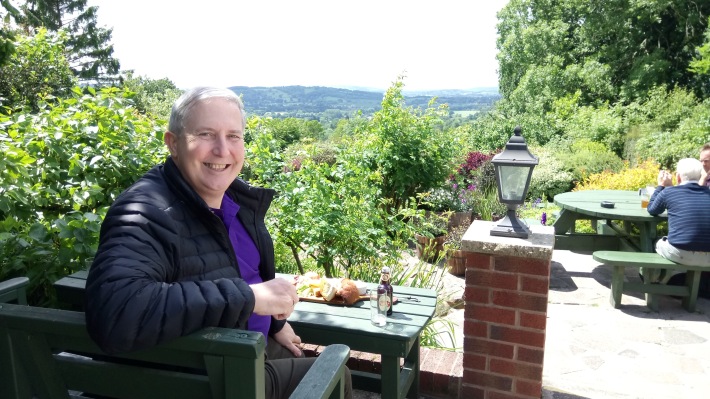 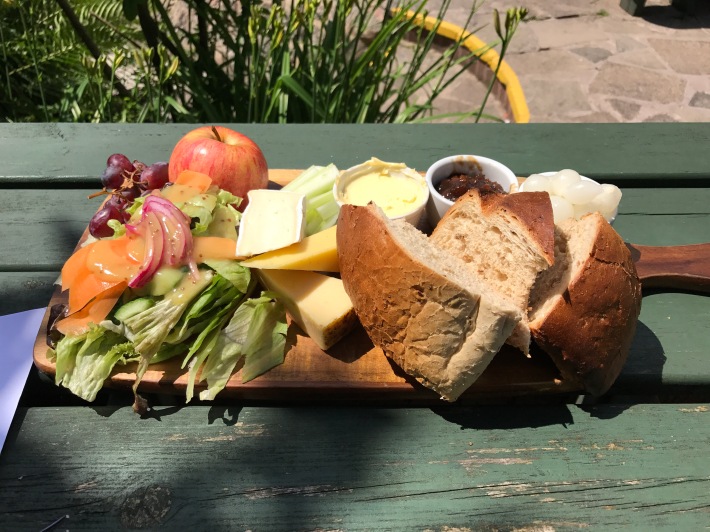 Then on to the Herefordshire Beacon, more commonly known as British Camp, or as I prefer ‘Mount Everest’. We walked to the summit of this Iron Age fort earthwork rising 338 meters. 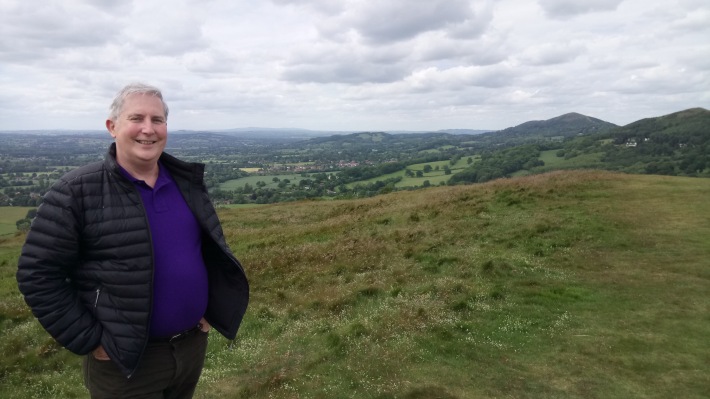 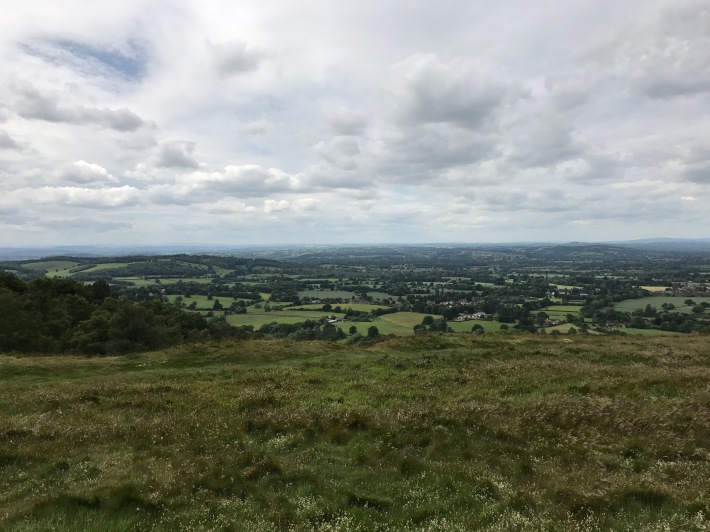 Following this adventure we visited Malvern College (it was a school day) in its sumptuous bucolic setting. So English. 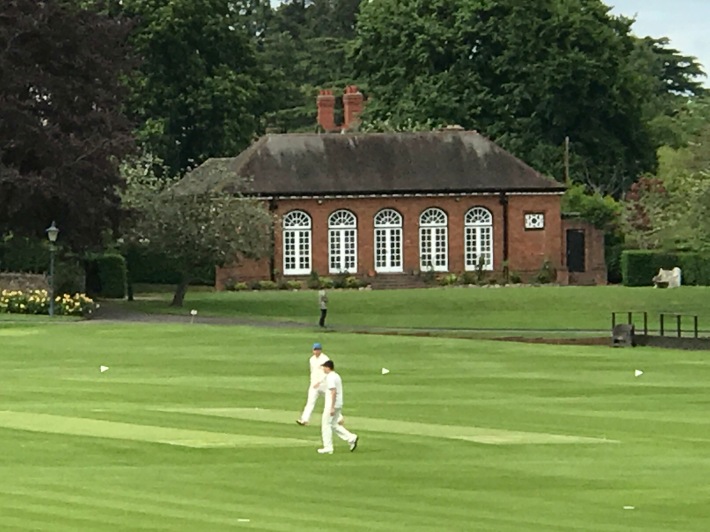 and chapel with its spectacular reredos which includes St George among the saints. 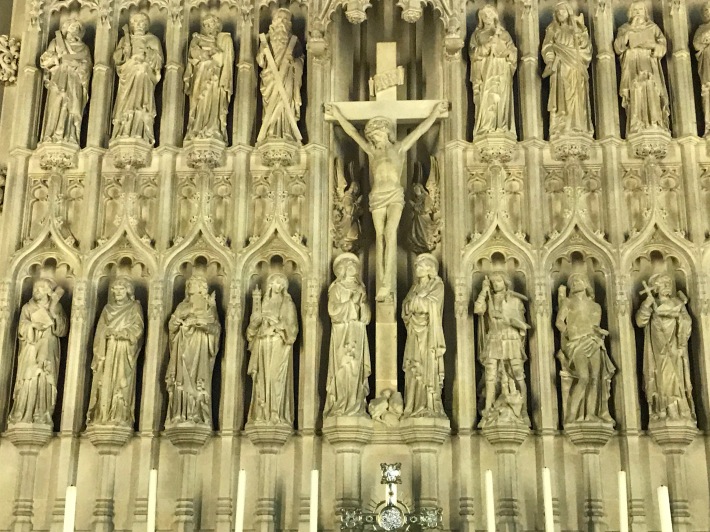 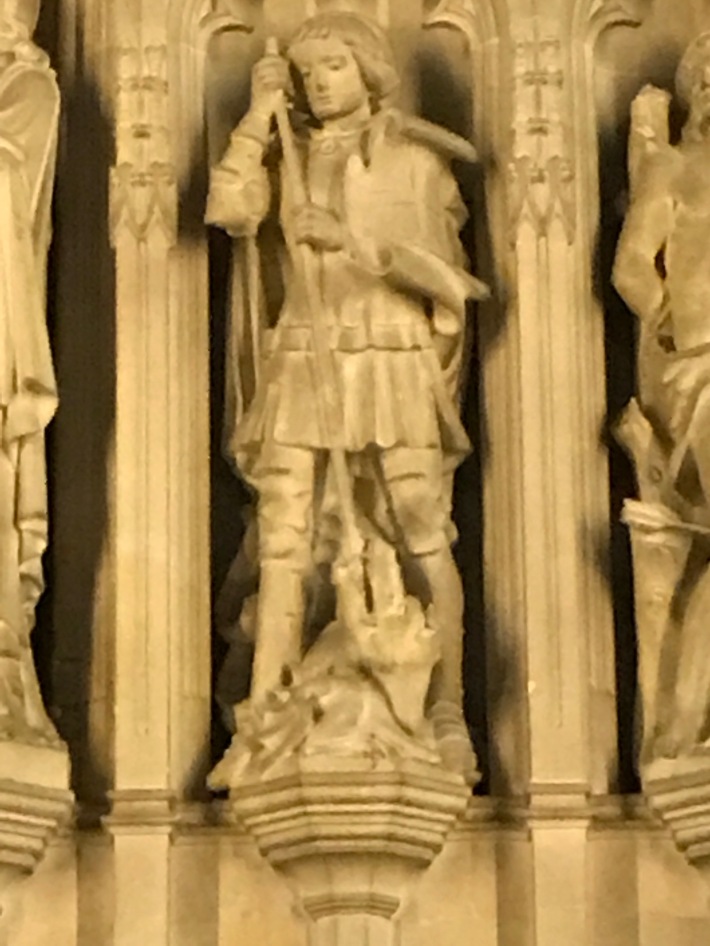 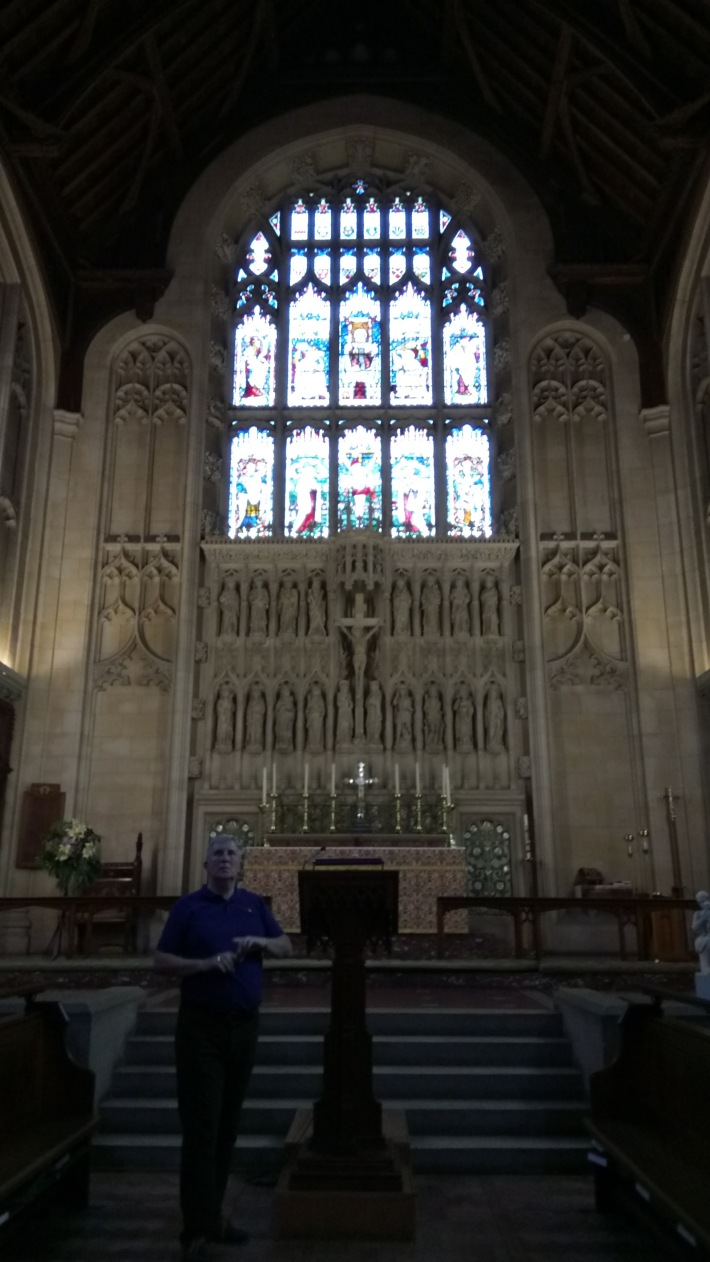 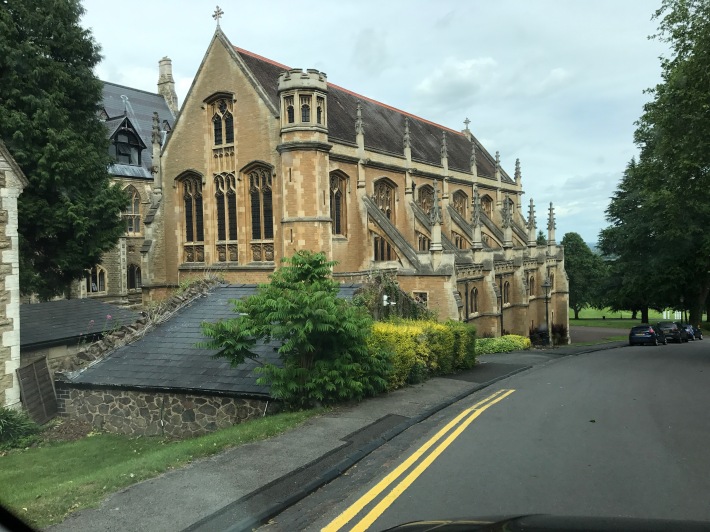 A tour of the Cunard family estate, now part of the College. 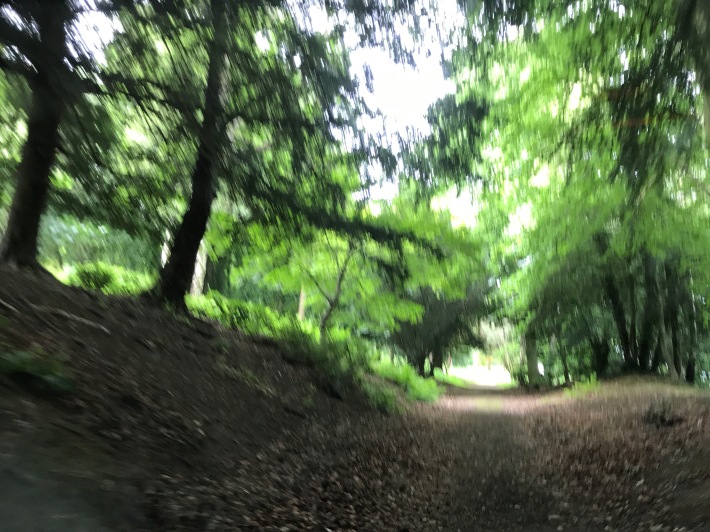 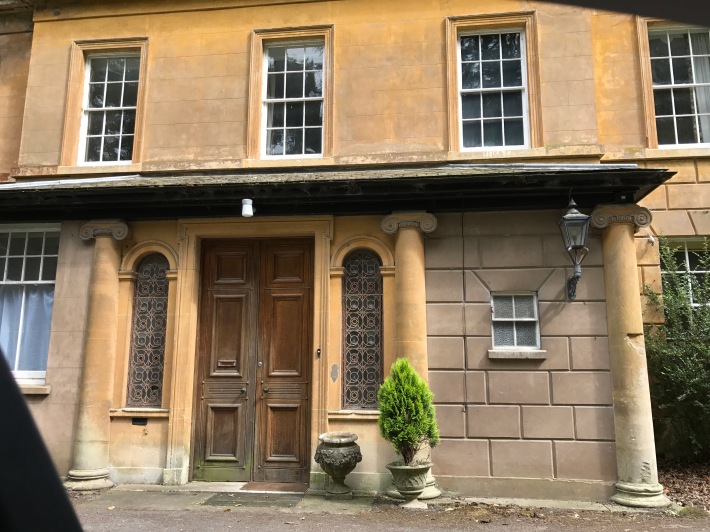 After a visit to Brad’s home (see separate post) we set out for dinner at ‘The Jockey’ in nearby Baughton. A gin aperitif followed by a great meal. 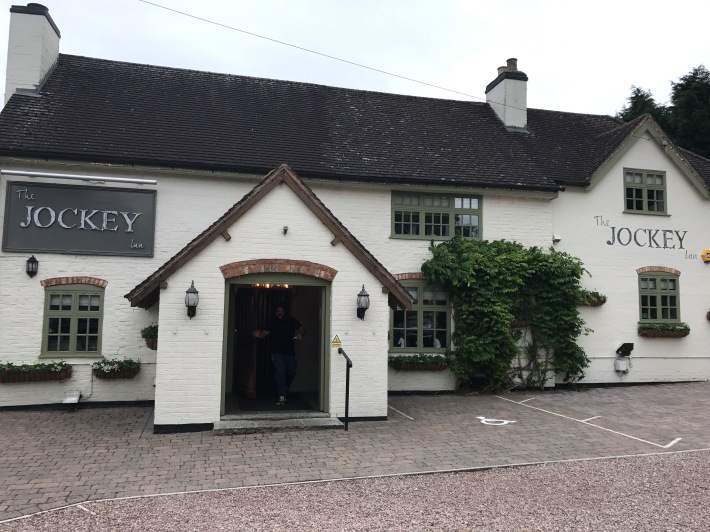 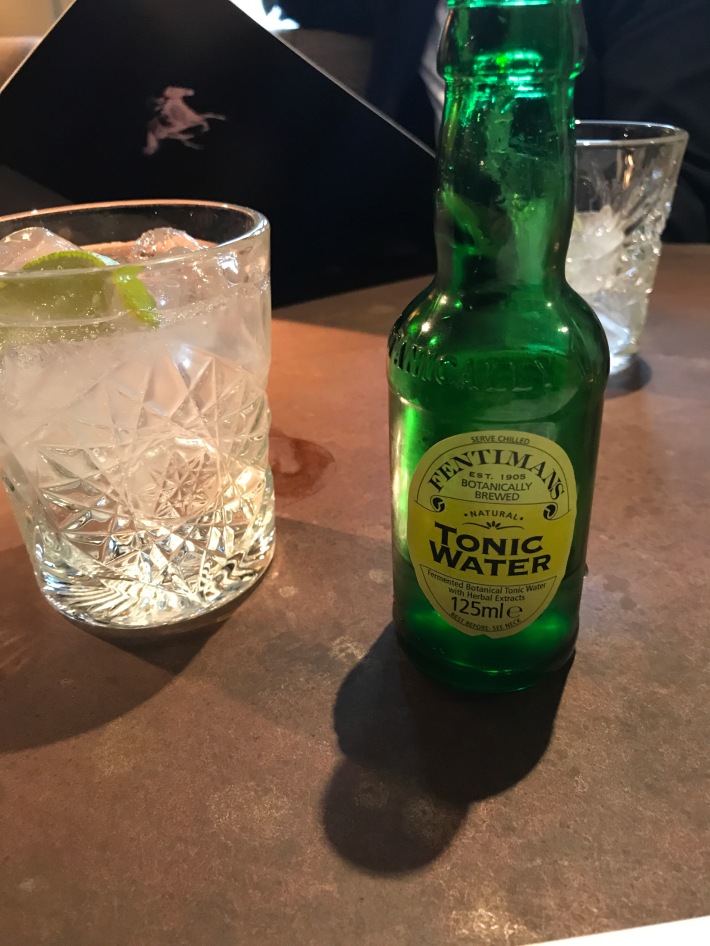 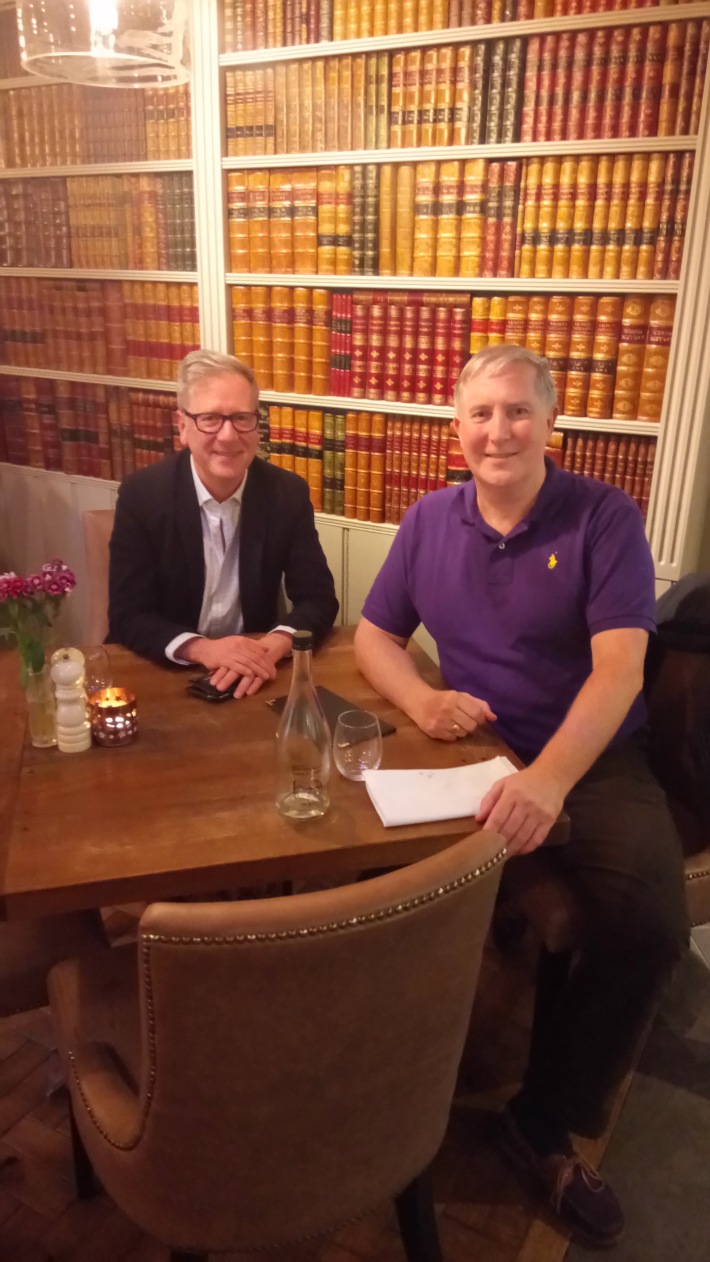 And then on to Brad’s local, convenient walking distance – The Nag’s Head, before my return train trip where I was the only person in first class (as it should be). 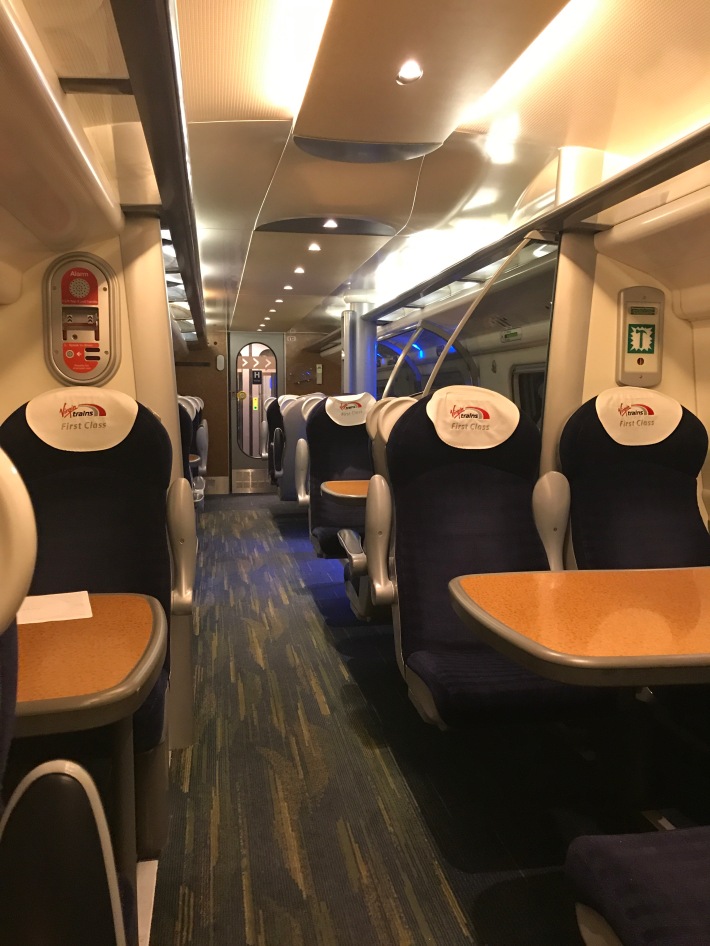