This evening I saw the final play of this year’s holiday. A rather long sabbatical for me, but not as long as the one suffered by the Reverend T Lawrence Shannon in Tennessee Williams’ 1961 play, The Night of the Iguana, which I have just seen at the Noel Coward Theatre right opposite my hotel in St Martin’s Lane.

The setting is the veranda of a hotel in the Gulf of Mexico in 1940 and the four main characters are in different stages of desperation. Maxine Faulk (Anna Gunn), the hotel’s recently widowed owner, has an unsatisfied hunger for life. The Rev Shannon (Clive Owen), locked out of his church for fornication and heresy and reduced to escorting bus parties around Mexico, arrives to suffer one of his periodic breakdowns. He finds an unexpected soulmate in the virginal Hannah Jelkes (Lia Williams), a watercolourist who roams the world hustling a meagre living with her 97-year-old grandfather (Julian Glover), who is struggling to complete his final poem.

Williams offers us study in solitude, a hymn to human endurance (for theaudience endurance over three hours) and yet there is a languidness that distinguishes this play from his earlier ones such as A Street Car names Desire, or Cat on a Hot Tin Roof.

Williams clearly has compassion for these four wrecked souls, the most problematic being Shannon, who was not that easy to like, and who doesn’t like Clove Owen (Gosford Park, Closer, Hemingway & Gelhorn – nominated for Emmy, SAG and Golden Globe awards). He plays ‘Rev’ Larry Shannon in dilapidated white linen suit, with the right nervous intensity, signalled by a shaking right hand. He has a ‘spook’ that accompanies him when he is anxious and there is much in William’s development of Shannon with which those familiar with mental health issues will find familiar. 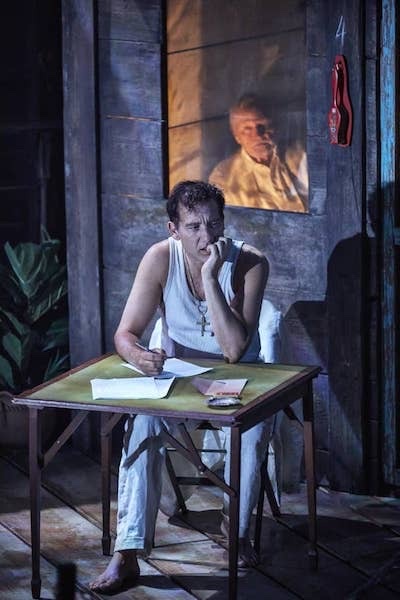 But Shannon is accused of seducing an underage girl, cruelly abandons the Texan Baptist ladies in his charge, constantly insults Maxine (his host) and appears to relish his breakdown. Owen faithfully captures all this but there is an element of narcissism to Shannon’s neurosis that keeps you at a distance.

Hannah charges him of conducting “a voluptuous self-crucifixion”.

In one sense it is brave to be mounting this play at a time when we are all on guard about attempts at empathy for predators. Shannon has a taste for seducing under-age girls. He thinks of them less as people than as figments of a personal self-disgust that drives him to lash out with post-coital violence, so we are told.

Much the most fascinating character is Hannah,

Lia Williams (Oresteia, The Prime of Missouri Jean Brodie) plays this more intriguing character, who displays an inner toughness and sharp wit beneath a spry, bird-like solitary. When a trussed-up Shannon claims, “A man can die of panic,” Williams quickly retorts: “Not if he enjoys it as much as you” and “You’re no danger to anyone but yourself“.

Lia Williams renders Hannah’s account of her two brief sexual encounters with a deeply touching acceptance of the waywardness of human passion.

She portrays Hannah with a luminous, challenging patience and dry humour – the embodiment of how to live beyond despair and still live. I think Lia Williams gave a standout performance.

Anna Gunn (Breaking Bad) plays hotel owner Maxine with a radiant sensuality that belies her profound loneliness and rampant jealousy. Julian Glover hints at a wicked humour in the nonagenarian poet and reads his final poem with great dignity, 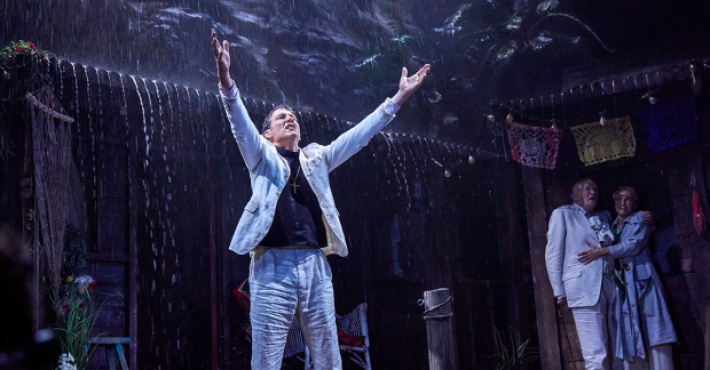 It is all very well done and evidently meticulously produced by James Macdonald. While this play has been described as Williams’s last really good play, it carries within it the intimations of his decline. It is full of underdeveloped characters, including a family of cartoonish German tourists noisily rejoicing in the bombing of London. I couldn’t make sense of their presence in terms of the plot or relevance, other than to distract hotel proprietors from time to time. Similarly, the Mexican hotel ‘boys’ are also vacuous characters.

The iguana makes a brief appearance as it is carried across the stages bundled in sacking and taken below where it can occasionally be heard thrashing around seeking release, much like the human characters. The parallel between the captive iguana, tied by the throat and craving freedom, and Hannah’s dying grandfather is also remorselessly spelt out.

This play may not be vintage Williams, but it survives through its opportunities for actors and the author’s boundless charity.